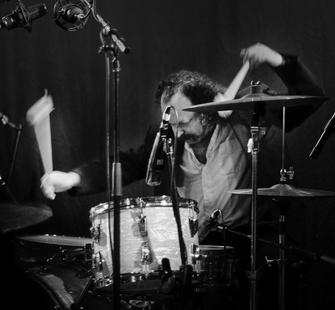 Jim White is an Australian drummer living in New York. Beyond being the drummer of the band Dirty Three (a band from Melbourne that has created many albums and toured extensively), White has curated the festival All Tomrorrow’s Parties, written for the AFI award winning movie Praise, and performed widely with many other groups and projects.  His other performance credits include having worked with Cat Power, playing on the albums Moon Pix and Juke Box: Smog’s A River Ain’t Too Much to Love, and Supper; Bonnie Prince Billy’s The Letting Go; PJ Harvey’s White Chalk; and with Nick Cave, Marianne Faithfull, White Magic, Seeker Lover Keeper, and the great cretan lyra player Psarantonis.  White also made a duo record with Nina Nastasia called You Follow Me and has toured and made albums with the Boxhead Ensemble.  His credits continue with music associated with the Dutch Harbour movie, projects with filmmaker Jem Cohen, and collaborations with visual artists Eve Sussman, Simon Lee and Brent Green.  He contributed to the movie The Proposition, as well as a track to Visionaire no. 53.  And, in addition, he has been involved with Hal Wilner Projects, and was a founding member of the Australian punk band Venom P Stinger, and many more.