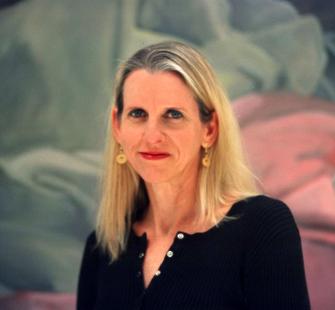 Her public art
works intervene in the urban landscape on public buildings, freeways,
in parks, hospitals, jails, schools, universities, homeless shelters,
and advertising venues. She has received numerous commissions and
awards for this work. Her recent projects include mural on a 24
story historic building for downtown Chicago’s loop district, the
artwork for San Francisco’s new Juvenile Hall and a gateway
sculpture for Gleason Park in Stockton. She is currently doing public
artworks for Glide Foundation’s new affordable housing as well as
the I-Hotel Manilatown Center in downtown San Francisco.

She was part of
the 2008 Yerba Buena Center for the Arts Bay Area Now 5 with the
Galleon Trade international artist exchange. Her recent exhibits
include solo shows at Crossing Tracks Gallery in San Diego and the
Togonon Gallery In San Francisco. She has also shown at The Los
Angeles County Museum of Art, The Bronx Museum, New Langton Arts, The
Luggage Store Gallery, Headlands Center for the Arts, The Lab and
Mag:net Gallery Katipunan in Manila. Her work is included the recent
Stanford University Press publication “Asian American Art: A
History 1850-1970.

She was raised in
the Philippines, moved to Chicago and currently resides in Oakland,
California. She received her BFA at University of California, Santa
Cruz and her MFA at Mills College in Oakland, California. She an
Associate Professor at the Visual and Public Art Department at
California State University, Monterey Bay.