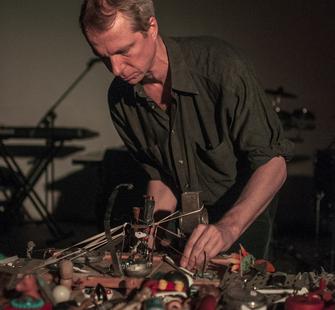 Freelance improviser,
composer, artist, inventor/builder of musical instruments, writer, educator,
technician: Bergmark is all these and more. During a visit to the Surrealist
Group in Chicago as a young man, he met instrument builder, artist, improviser
and composer Hal Rammel, which was decisive for him: he began to invent and
build his own musical instruments and also to play the musical saw. One of
the founders of the Surrealist Group in Stockholm in 1986, he has also been a
participant in the jester and street theater group Stella Polaris (1995-99); an
actor and composer in the Norwegian theatre company Eventyrteatret (1995-2004);
and organizer for the festival Oslo Impro (1997). He was also chairman of FRIM,
the association of free improvised music (2001-02) and secretary of RANK, the
National Association of Organizers of New Music (2001-03). In addition to
touring as a musician, he leads workshops in experimental musical instrument
making, and writes texts on various subjects. Read more at bergmark.org.