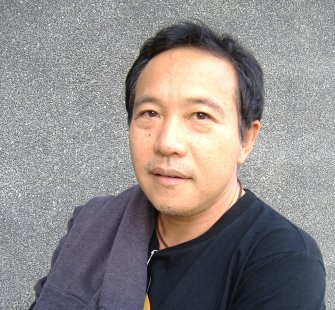 Kamol Phaosavasdi is renowned as one of the
forerunners of Thai conceptualization and installation video
artists who has exhibited widely in Asia,
Australia, Europe and the US. Also in 2003 he participated in the 50th Venice Biennale, Italy. His work is often
situational and site-specific as viewers’ interaction
and participation are essential. His happenings and
performances are provocative and make us ponder about
the potential of body art that is frequently
stereotyped as part of dissident art.

In the late 2000, the meaning of tranquility in
Kamol’s work has been appearing in the exhibition Bon
Voyage(2002) to the Quiet Stoem (2005). Therefore,
personal sensation and experience are the most
important factors in communicating work and idea of
the artist to the audience.Even though the work of
Kamol also talks about spiritual topics, he has looked
at different aspects of spirit. It is not like
spiritual in art, especially when considering through
history of western art, as some issues like
expression, which is the inner self’s issue, was not
appeared in Kamol’s work despite their non-realistic
form connections.