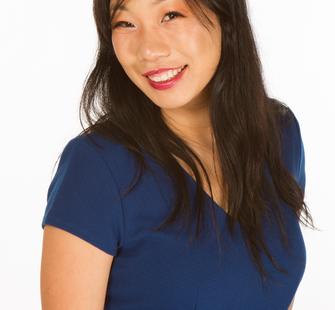 Kristina
Wong was recently featured in the New York
Times’ Off Color series “highlighting artists of color who use humor to make smart
social statements about the sometimes subtle, sometimes obvious ways that race
plays out in America today.”

She
is a performance artist, comedian and writer who has created five solo shows
and one ensemble play that have toured throughout the United States and
UK.  Her most notable touring show– “Wong Flew Over the Cuckoo’s Nest”
looked at the high rates of depression and suicide among Asian American women
and toured to over 40 venues since 2006. It’s now a broadcast quality film
distributed by documentary juggernaut, Cinema Libre Studios. (More at www.flyingwong.com).

She’s
been a guest on Comedy Central’s The Nightly Show with Larry Wilmore, FXX’s “Totally
Biased with W. Kamau Bell,” and AM
Tonight on Fusion TV.  She’s been a commentator for American Public Media’s Marketplace, PBS,
Jezebel, xoJane, Playgirl
Magazine, San Francisco Magazine and Huffington Post.  Her work has been
awarded with grants from Creative Capital, The Map Fund, Center for Cultural
Innovation, the Durfee Foundation, National Performance Network, five
Artist-in-Residence grants from the Los Angeles Department of Cultural Affairs,
and a residency from the MacDowell Colony.  Kristina has twice given the
commencement speech at UCLA, her alma mater.  On television, she’s been on
General Hospital, Nickelodeon’s “Nicky Ricky Dicky and Dawn,” and Myx TV’s “I’m Asian
American and Want Reparations for Yellow Fever.” Her
newest solo show “The Wong Street Journal” navigates privilege and economic
disparity and premieres in June 2015 in San Francisco.

She
spent a month in Northern Uganda researching that show and recording a rap
album with local rappers. This Fall, she will be a guest professor in the
CalArts Creative Writing MFA Program.