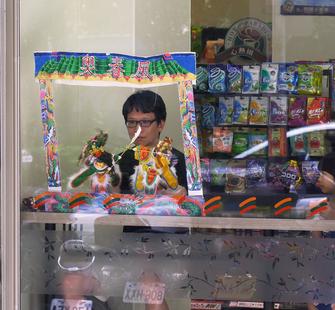 ​Kuang-Yu Tsui’s work responds to the relationships between humans and society from a biological point of view. He also attempts to redefine or question the institutions we inhabit through different actions and experiments that ignore the accustomed norm. His repetitive body experiments accent the absurdity of the social values and the reality to which people have grown accustomed. Tsui was born in Taipei, Taiwan; he graduated from the National Institute of the Arts in 1997 and he has exhibited internationally since—including at the Venice Biennale, the Liverpool Biennale, the Werkleitz Biennial, the Contour Biennial, Reina Sofia Museum (Madrid), ZKM Center for Art and Media (Germany), the Chelsea Art Museum (New York), the Mori Museum (Tokyo), and OK Centrum (Austria).