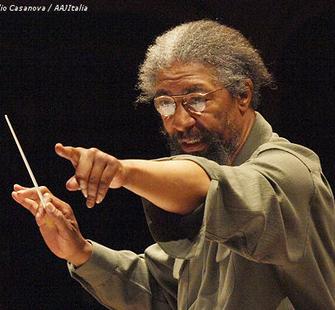 Lawrence
D. “Butch” Morris is
recognized internationally as a leading innovator in the confluence
of jazz, new music, improvisation and contemporary classical music,
and is the principal theorist and practitioner of Conduction®.

Since
1974, his career has been distinguished by unique and outstanding
international contributions to concerts, recordings, film, theater,
dance, television, radio, and interdisciplinary collaborations.

Over
the last 25 years, Mr. Morrishas
spearheaded the advancement of Conduction as compositional practice
and catalyst for a higher order of musicianship. He has played the
central role in the generation and refinement of the system’s
vocabulary of signs and gestures.