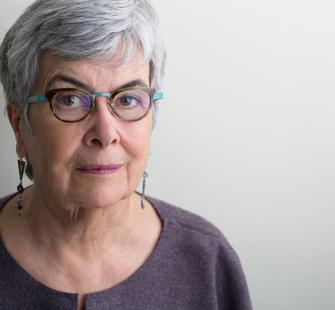 Linda Lancione grew up in the Bay Area and was
educated at the University of California, Berkeley. She began writing poetry
seriously in the early seventies, under the sway of feminist poets such as
Sharon Olds, Adrienne Rich, Susan Griffin and Alta. Her poems have been published widely in literary journals and
anthologies, such as Atlanta
Review, Baltimore Review, Cimarron Review, Connecticut Review, Crazyhorse, Harpur
Palate, Hawaii Pacific Review, Italian Americana, The Jabberwock Review, The
MacGuffin, Notre Dame Review, Poet Lore, Spillway, and The Sun.

She has published three poetry chapbooks,
Wanting the Moon, This Short Season, and 2% Organic, Poems from a West Marin Dairy Barn. Although Linda’s primary focus has been
poetry, in the 1990s she co-wrote
two travel guides with Burl Willes, Undiscovered Islands of the
Mediterranean and Undiscovered Islands of the U.S. and Canadian West
Coast.  More recently, she’s also
been writing essays and fiction.

Her
personal essay, “The Currency of Love,” was awarded New Letters’ Dorothy Cappon Churchill Prize for Best Essay in 2010.
The judge, David Shields, described it as “heartfelt, ruthless, and bristling
with intelligence.” Subsequently, that essay was given special mention in both
the Pushcart Prize and The Best American Essays. Other honors include: Finalist, Bordighera Prize in Poetry, 2011; Finalist,
New Letters Poetry Contest, 2011; Helene Wurlitzer Foundation Residency
Fellowship, 2008 and Montalvo Center for the Arts Lucas Arts Program Residency
2013/2014.

In March, 2016 her new chapbook, The
Taste of Blood, will be published by Finishing Line Press. She
is working on a novel, Hawk’s Reach.