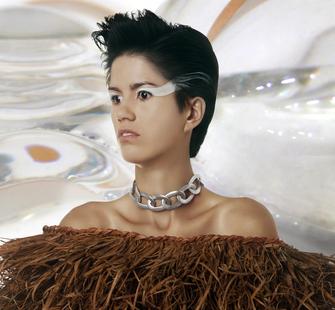 Lisa Reihana has forged a powerful reputation internationally as an artist, communicator, producer and cultural interlocutor of tremendous generosity and intelligence. Her practice astutely weaves visual forms of cultural representation from historical and contemporary sources, both from within and without indigenous communities, with multiple narratives retold in a considered recalibration of imagery, symbolism and the power of the visual. Attention to the complexities of photographic and filmic languages, and an ability to harness seductively high production values provides the artist with the effortless facility to interrogate through a veritable force field of globalized, digitized and cultural languages.
Reihana has an extensive exhibition history including showing in Global Feminisms, Brooklyn Museum; the Asia-Pacific Triennial, Queensland Art Gallery, Australia; the Liverpool Biennale, UK; Pasifika Styles, Cambridge, UK. Digital Marae shown at Govett-Brewster Gallery in New Plymouth 2007 was selected for the Walters Prize 2008 and Anne Landa Art Award, AGNSW, Sydney. She has also undertaken a number of public art commissions including Rangimarie Last Dance Q Theatre; and a series of Maori Commissions with ‘Kupenga Design’ for the Victoria Park Alliance in several public locations in Auckland.