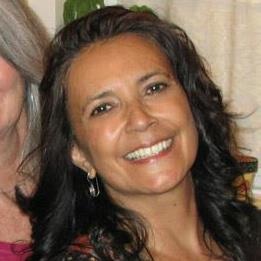 Liz González, a fourth generation Southern Californian, grew up sixty miles east of Los Angeles in San Bernardino County. Liz’s poetry, fiction, and memoirs have appeared in literary journals and periodicals such as Inlandia: A Literary Journey, BorderSenses, Cooweescoowe, Heliotrope, Luna, Brújula/Compass, Cider Press Review, The San Francisco Chronicle, and New Delta Review. Her work can also be found in the anthologies Don’t Blame the Ugly Mug Poetry Anthology, Women on the Edge: Writing from Los Angeles, So Luminous the Wildflowers: An Anthology of California Poets, and Grand Passion: The Poets of Los Angeles and Beyond. She is the author of the limited edition chapbook Beneath Bone, published by Manifest Press (2000).

Liz’s other awards include a Macondo Foundation Casa Azul Writer’s Residency, the Arts Council for Long Beach’s 2005 Professional Artist Fellowship, a fiction writers grant from The Elizabeth George Foundation, and a residency at Hedgebrook: A Retreat for Women Writers. As the 1999/2000 Writer in Residence at the Phoenix College Creative Writing Program, she curated and organized literary readings by Writing Program students and established writers.

Since 1993, liz has conducted creative writing workshops, organized literary readings, and performed her poetry, fiction, and memoirs in universities, community colleges, libraries, high schools, community centers, and other venues throughout the Southwest and West. She is a member of the Macondo Writing Workshop, founded by Sandra Cisneros.

Liz earned an M.F.A. in English and Creative Writing at Mills College. Currently, she lives in Long Beach with her dog Chacho and teaches creative writing at community centers, in private workshops, and through the UCLA Extension Writers’ Program.