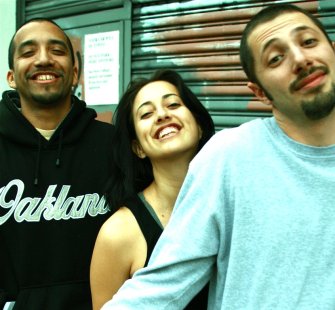 Luis “Xago” Juarez has been dedicated to teatro since first attending a Summer workshop at El Teatro Campesino in 1990 and has been active in producing work for his community in East Salinas, starting with a one-man show, “Zero” and two Christmas plays, “A Christmas Carol Y Que!”  and “A Market Street Milagro” produced by the Alisal Center for the Fine Arts. Xago has starred in numerous theatre productions with Teatro Campesino and Los del Pueblo Actors Lab.  In 1993 he co-founded a community-based performance troupe called Los Illegals Comedy Clica. LICC has performed in venues in and around the state with an emphasis on at-risk populations, including juvenile detention centers and public schools. In 2002 LICC was featured in a series of events in New York City commemorating the 911 attack. From 1997 to present, Xago has been a member of Baktun 12, a hip-hop theater crew from East Salinas.  Xago now lives in East Oakland and leads theatre workshops for middle and high school students. In addition to teaching, he is a member of headRush, an Oakland-based a spoken word teatro troupe.