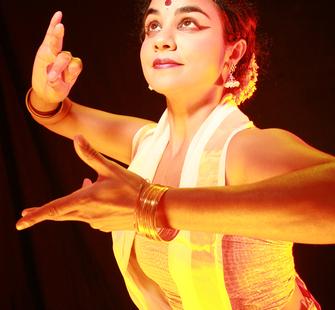 Malini Srinivasan is a third-generation Bharatanatyam choreographer, dancer and teacher. She is the disciple of world-renowned artist Sri C.V. Chandrasekhar. Malini began studying Bharatanatyam at a young age with her mother, Radha Srinivasan and grandmother, Komalavalli Mani. She performed her Arangetram (debut) under the guidance of Meena Raman. Malini lived in Chennai from 1999-2004 to pursue her study of dance and its allied art forms such as Nattuvangam, Carnatic vocal music, Kalaripayattu, Yoga, Sanskrit and Tamil.
A critically-acclaimed Bharatanatyam soloist, Malini has performed widely in the U.S., Europe and India. She has also performed with groups including the Padmini Chettur Group, Ragamala, Rajika Puri and Dancers, and Thresh.
Malini has choreographed solo and group pieces, including The Swan (2011) and Tejas-Luminous (2009). She was recently awarded the FringeNYC Overall Excellence Award for Choreography for Being Becoming, which was presented in the 2012 New York International Fringe Festival. Malini was awarded the Dance in Queens Residency (2009) the LaGuardia Performing Arts Center Residency (2010), and the Queens Council on the Arts Individual Artist Grant (2010, 2012). Based in Queens, NY, Malini is a Lecturer at the Asian & Asian-American Studies Department at SUNY Stony Brook and is on the dance faculty of the Young Indian Culture Group and Anamika-Navatman.