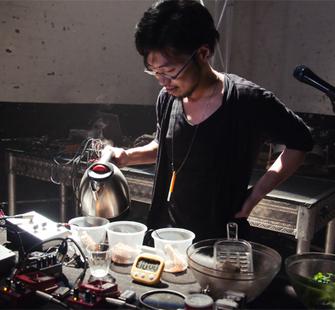 Okuno’s artistic practice crosses over sound/music and visual art. He looks into the simple gestures and the complex social condition of the everyday life at the same time, and brings out the “beauty” of the sound that derives from there. It results as the live performances, where artist becomes the host to invite and guide the guests introducing the subtle sound that they might have heard but never intentionally listened to. It is a type of relational art in a sense that he interacts with audience to create and share the experience in time and the environment on spot. The video works crystallize the ritual aspects of the performance and stresses more of his visual and conceptual ideas. It is also realized as the installation works consisted of the ordinal furniture and everyday objects with the visual/written instructions for the audience/visitor to explore the sound by themselves.

After the graduation, he had performed improvised music, first on piano, and later using some self-made-instruments and electronic devices such as loop samplers, and exhibited multi channel multi source sound installations in various venues, including Espace Pier Paolo Pasolini (Vallemcienne, 2005), The National Gallery of Armenia (Yelevan, 2006), BankART(Yokohama, 2007). Since the beginning of his career, he had been interested in the sound of everyday life. In the earlier works, it appeared as the use of field recordings or as the recorded ambient sound such as water drops. They were embedded into the sound composition along with other musical elements whether it was a performance or an installation.

However, in his latest project entitled “etude for everyday life”, he started to highlight and incorporate the everyday objects and practices as the main material to create intimate listening experience. The objects such as plastic straws, food wrap, ice, steel hanger, instant noodle, electric kettle, and microwave are employed to make the sound. He also integrate everyday practices such as purchasing products, eating food, drinking into his work as means to create his art work. He extracts the essence or forms and rearrange them in a different way in order to create the unexpected sound experience. His affirmation goes towards the things that our highly rationalized society would ignore or regard as worthless. He looks at them from a different perspective, also listen to them, and present the opportunity for the audience to rediscover and live their lives creatively. The “etude for everyday life” series has been exhibited and performed at The Japan Foundation (Hanoi, 2011), MOCA Taipei (Taipei, 2011), Aomori Contemporary Art Center(Aomori, 2011), MUMOK (Vienna, 2009), SCHELTEMA (Leiden, 2009), La Chambre Blanche (Quebec, 2008), YUKA TSURUNO (Tokyo, 2010-), B-312 (Montreal, 2008), and various other places. In 2010, the “etude no.13 hanging ice” won the first prize at the TOKYO EXPERIMENTAL FESTIVAL organized by Tokyo Wonder Site.