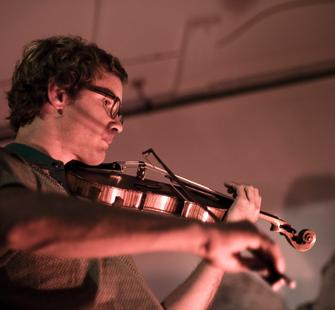 Matt McBane (b.1979) has been described as “a natural
composer, a fresh voice and, from the evidence of his festival, a first-rate
organizer with a broad range of musical interests” by Mark Swed in the Los
Angeles Times and as having  “a fantastic
intuitive sense that is backed up by a serious amount of compositional craft”
by Sequenza21. Matt is the violinist and composer for his
Brooklyn-based indie-classical band, Build, which Steve Smith described in Time
Out New York as “a new quintet that
straddles the increasingly permeable line between chamber music and
instrumental rock.” Build released its debut album on New Amsterdam Records in
the summer of 2008 to widespread critical acclaim and regular play on NPR’s All
Things Considered. In October 2009 the album was re-released with distribution
from Naxos. Matt is the Founder and Director
of the Carlsbad Music Festival,an
alternative classical music festival praised by the Los Angeles Times as “marvelously enlightening” featuring master artists and the next
generation of world-class musicians and cutting-edge new music since 2004.

Matt has been commissioned by many ensembles including the
Calder Quartet, NOW Ensemble, Real Quiet and the California EAR Unit, and has
appeared at venues including Carnegie Hall, the Bang
on a Can Marathon (NYC), Disney Hall’s REDCAT (LA), the Whitney Museum
of Art, Joe’s Pub (NYC), and many others. He has also
collaborated extensively with choreographers and video artists and has scored
several independent films. Matt and his projects have been the
recipients of numerous grants, awards, and prizes from organizations including:
the American Music Center; ASCAP, Meet the Composer, and the American
Composer’s Forum. Matt studied composition at the University of Southern
California’s Thornton School of Music with Donald Crockett.