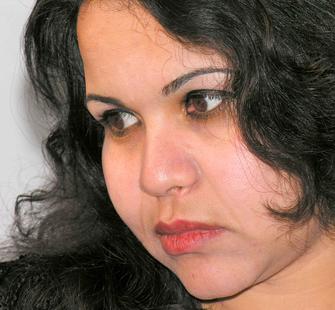 Born in Cairo, Egypt, Nagat Ali graduated from Ain Shams University with a BA in literature.  She also has an MA and is currently preparing a PhD on the novels of Naguib Mahfouz.  Ali also has published three volumes of poetry:  A Superstitious Creature Adores Garrulousness (Supreme Council of Culture, Egypt, 2002); Cracked Wall (General Egyptian, Egypt, 2005); and Like the blade of a knife (Darnahada, Beirut, 2010).  Her poems have been translated into English, French, German, and Kurdish.  In addition, Ali published the book The Irony in the Short Stories of Yusuf  Idriss (Supreme Culture, Egypt, 2009).

In 2009, Nagat Ali was awarded the Tangier Prize for Poetry in Morocco.  She also has been selected as one of the best young writers at the Arab Festival Beirut39.