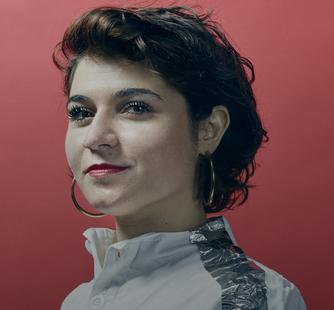 Dubbed the ‘Willy Wonka of Design’, award-winning Director, Designer of Experiences, and filmmaker Nelly Ben Hayoun-Stépanian aims to bring the sublime to life and by creating multidimensional experiential projects at the intersection of science, theatre, politics, music, and design. In 2018, Nelly was distinguished as first on a list of top 50 women on the speaker circuit by The Drum Magazine; while in 2017, Creative Review named her one of the Creative Leaders 50, selecting 50 creatives that they felt were ‘driving change, not just within their organization but in the world at large.’ Dezeen selected her as one of the ‘50 inspirational women in architecture and design,’ while Wired awarded her their inaugural Innovation Fellowship in 2014. Icon magazine recognized her as one of the top 50 designers ‘shaping the future’ for her pioneering “total bombardment” design philosophy, and Indiewire nominated her as one of SXSW 2015 highlights.

Nelly is Designer of Experiences at the SETI (Search for Extraterrestrial Intelligence) Institute, course director and founder of the University of the Underground, Chief of Experiences at file transfer service company WeTransfer, a Vice Chair of The Committee for the Cultural Utilization of Space (ITACCUS)  at the International Astronautical Federation, a United Nations Advisor to the UN VR (Virtual Reality) labs and UN Education Goalkeeper 2018, an associate fellow at the Hannah Arendt Center for politics and humanities at Bard College, an advisory board member at AIGA (American Institute for Graphic Arts) in Los Angeles, and a visiting professor at the Royal College of Arts and the Architectural Association. In 2016, she was awarded with the Central Saint Martins, University of the Arts London Teaching Award.

Ben Hayoun is the author and director of three feature length documentaries. She was awarded The Arts Council England Exceptional Award for her feature-length documentary Disaster Playground. Disaster Playground follows the chain of command in place in the event of a hazardous asteroid impacting the earth. It was nominated for a Vision Award at SXSW 2015 and is distributed on Netflix North America and other digital platforms. Her latest documentary – I am (not) a Monster – is on the origins, power structures, and mechanics of knowledge and the act of thinking. It is set for release in 2019.

When not filming, Nelly Ben Hayoun runs the University of the Underground, a free postgraduate university based in the underground of nightclubs in London and Amsterdam, composed of dreamers of the day and supporting unconventional research practices, plurality of thinking and free and transnational education.

Nelly received a BA in Textile Design at ENSAAMA Olivier De Serres (National College of Applied Arts) in Paris, an MA with distinction from the Royal College of Arts in Design Interactions, and she holds a PhD in Geography (Human Geography and Political Philosophy) from Royal Holloway, University of London. Dr. Ben Hayoun and her doppelgängers currently split their time between London, Amsterdam, Mountain View, and New York City.