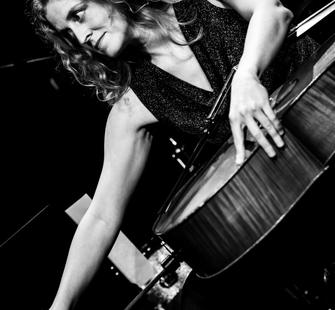 The Berlin based cellist Nora Krahl is passionate about contemporary music and has performed throughout Europe, Middle East, Asia and in the USA at festivals as Ruhrtriennale, Munich Biennale, Bang on a Can Summer Festival (USA), the International Conference of ISEA, International Summer Academy for Contemporary Music Darmstadt, SICPP (Boston), Next Generation of ZKM or Baghdad International Theater Festival. She worked with musicians like Lukas Fels, Rohan de Saram, Nickolas Photinos, Todd Reynolds or Vicky Ray and composers as Tristan Murail, Helmut Lachenmann, Martin Bresnick, Johannes Kalitzke and Michael Gordon and Ensembles like Ensemble Resonanz, Reflexion K and Zeitkratzer.

Nora Krahl focuses also on acoustic and electronic improvisation. Within the project CHROMATOPHORE she and the visual artist Sena Başöz (Istanbul) are exploring the amalgamation of visual and audio media. In 2013 she founded „The Octopus“ (free improvisation Cello Quartet) and since 2015 she works with Juan Felipe Waller in the analog electronic duo Rabiator. Nora Krahl performs in varying groups with musicians as Elliott Sharp, Joëlle Léandre, Jon Rose, Frank Gratkowski, Reinhold Friedl, Audrey Chen or Oguz Büyükberber.

Ms Krahl works as a performer, musician and composer in theater plays and with dancers. In 2015 she premiered her own solo compositions Guerin for Cello, thunder sheet and electronics as well as „in between words“ for cello solo at Hamburger Bahnhof (Berlin). In 2016 she premiered Verrine and she did direct her first music theater piece „Persona non Grata“ in NYC. She works with the German director Karin Beier at Schauspielhaus Köln and Deutsches Schauspielhaus or at Columbia University NYC. She did compose and produce the music for the Turkish documentary Film “Kepi“ and collaborated with the Japanese Dancer Aya Irizuki in the projects SILK and Static Air.

Ms. Krahl was awarded numerous scholarships by the Berlin Senate, DAAD (German Academic exchange Program), Paul-Sacher Foundation Basel, Ensemble Modern, Allianz Kulturstiftung and the State of Niedersachsen. She was awarded artist residencies in Istanbul by the foundation of the arts (Germany) and in New York City by the State of North Rhine Westphalia (Germany). Ms. Krahl holds a German music diploma from the Folkwang University of the Arts, where she studied with Professor Alexander Hülshoff. Furthermore she attended masterclasses with Steven Isserlis, Ralph Kirshbaum, Christoph Richter, Valentin Erben and Enrico Dindo.

She taught at Folkwang University of the Arts Essen, and she runs workshops and masterclasses, including “Cello in the 20th and 21st Century“ at University of Music Mannheim, Bogazici Üniversitesi and MIAM the Music Graduate School of ITÜ Istanbul.