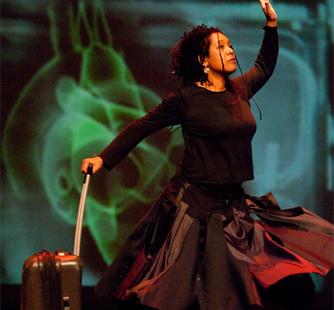 Pamela Z has toured extensively
throughout the United States, Europe, and Japan. She has performed in numerous
festivals including Bang on a Can at Lincoln Center (New York); Interlink
(Japan); Other Minds (San Francisco); Pina Bausch Tanztheater Festival
(Wuppertal, Germany); and La Biennale di Venezia (Italy). She is the recipient
of numerous awards including a Guggenheim Fellowship, the Creative Capital
Fund, the CalArts Alpert Award in the Arts, the ASCAP Music Award, an Ars
Electronica honorable mention, and the NEA and Japan/United States Friendship
Commission Fellowship.  She holds a
music degree from the University of Colorado at Boulder.