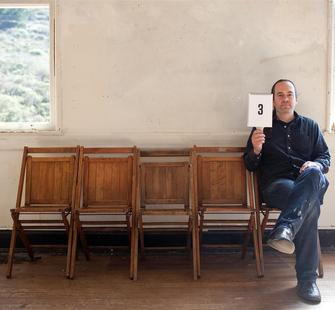 Paolo Salvagione works at the intersection of engineering,
participation, and levity. In his art, Salvagione has sent his studio visitors
out one second-story window and in another on a 900-pound steel wheel. He has
used a laser cutter to give negative space a razor-sharp edge, creating a
frozen bellows of light. He has filled a World War I gymnasium with a mix of
pure geometry and pure fun in the form of ten oversized swings, with the
implicit suggestion that visitors compete. He has commented on the role of
finance in the art market by selling uncut currency presented in a fetishized
box, including a pair of paper sheers. And he has pushed kinetic sculpture past
what the eye perceives as sufficiently balanced.

He is an autodidact by trade and yet, as the son of a printmaker and the
grandson of a sculptor and of an architect, very much an artist schooled in
tradition. All his works balance humor and craftsmanship, the novel and the
banal, the tactile and the conceptual.

Salvagione was born in Chicago and at an early age moved with his family to
Southern France. He spent his teen years in Albuquerque, New Mexico, living
around the corner from Joel-Peter Witkin, whom he occasionally assisted with
set construction and corpse transportation. He spent his college years in
Manhattan reading philosophy.

Grounded in the practice of thinking about thinking about things, he spent a
half a decade circling the world setting up bicycle factories from Italy to
Indonesia — mastering titanium fabrication after hours at Martin Marietta in
Colorado, working on next-generation paint-application systems for Boeing,
employing CAD software for hi-tech bike design in Marin, even designing an
atmospheric-dust collection tool for NASA. He worked, for over a decade, as
lead engineer on the 10,000-Year Clock of the Long Now Foundation, and led the
Artist in Residence program for Autodesk.

His residencies and fellowships have included the
Fleishhacker Foundation and the Headlands Center for the Arts, and he has
exhibited as part of Das Walhalla Projekt in Regensburg, Germany, and the ZERO1
Biennial in San Jose, California, among numerous other places.