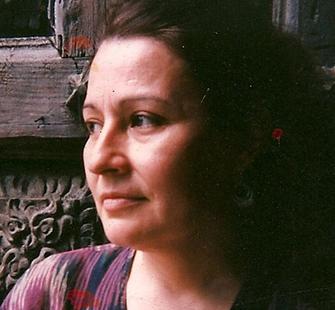 Patricia
Wells Solórzano was born in Brawley, Calif., a small town 25 miles
north of the U.S.– Mexico border. She was raised on both sides of the
border, and grew up with both Mexican and American music. She played
various instruments in elementary school and junior high school
marching bands. In high school, she was the junior class director of
the drama production and she performed throughout the community with a
ballet folklorico group (Mexican folkloric dance).

While she was
a college student at CSU Northridge, Wells volunteered in the secondary
boycott of Gallo Wines in the L.A. area, led by the United Farm
Worker’s Union. Her contact with UFW organizers and farm workers
themselves profoundly changed her perspective of the world. In 1975,
she joined El Teatro de la Tierra, a non-profit arts education
organization. Wells taught Spanish classes to children in the community
while studying drama with Teatro members. In 1976 she moved to Mexico
City, D.F. Mexico, to study Mexican and World History at the
Universidad Autonoma de Mexico, and returned to Fresno two years later.

Wells
studied singing and lead guitar playing in 1979 with Agustin Lira.
Together they created “The Story of the Chicano,” a program chronicling
the Mexican American experience through music and narrative. Shortly
thereafter, she and Lira formed musical group “Alma.” As part of Alma,
Wells toured nationally and internationally, and some of her most
memorable performances include the American Folklife Festival hosted by
the Smithsonian Institution in Washington, DC, the Cervantino
International Arts Festival, in Mexico, and the U.S. – Cuba Friendship
Concert in Havana Cuba.

A new CD release “Rolas de Aztlan: Songs of the Chicano Movement” (Smithsonian/Folkways Records) contains Lira’s song Quihubo Raza,
produced and recorded by Wells and Lira. Wells scored music for the PBS
and Paradigm film “The Fight in the Fields: Cesar Chavez and the
Farmworker’s Struggle.”

Wells has taught music from the early
1980s to the present. Through Artist in Residence Awards from the
California Arts Council and other arts funding agencies, she has worked
with all age groups including: kindergarten -12, migrant/immigrant
children in rural and urban communities, cultural centers, colleges,
correctional institutions, and so on. She produced concerts of Latin
American Folklore and Nuevo Canto at local cultural centers, churches
and theaters in Fresno from 1985 through 2003.

In the Fall of
2006, Wells received special recognition from the University of Rhode
Island Center for Non-Violence and Peace Studies “for career
contributions using music and theatre on the pilgrimage to social
justice.” As part of Alma, she received the prestigious Montalvo Artist
Residency for 2006-2008. Patricia is featured in a forthcoming book
“Mujeres de Conciencia/Women of Conscience” by Victoria Alvarado
honoring the work of California Latinas for their lifelong dedication
and contributions to the community. The California Council for the
Humanities has just launched an online project for California schools
that includes Wells biography called “Latino Voices.”

In
January of 2000, Wells studied the fundamentals of theater technique
with Lira and together they founded “Teatro Inmigrante” and produced a
new full length play titled Esperanza & Luz: A Tale of 2 Immigrant Women.
Wells played a lead role when it debuted at the Tamejavi Festival in
Fall of 2002. A year later she acted in and co-produced Lira’s new work
titled Cruz, Miracle at Labor Camp 12, which debuted at
Fresno’s Rogue Festival. In the summer of 2004 the Pan Valley Institute
of the American Friends Service Committee contracted Wells and Lira to
co-write and direct a play titled The Music of Life: The Life & Times of Candelaria Arroyo, which debuted Oct.6, 2004, at the Tamejavi Festival. She produced and performed music in the theatrical dramatization of I Am Joaquin, touring the show to UCSD, Galeria Posada in Sacramento and Butte College.