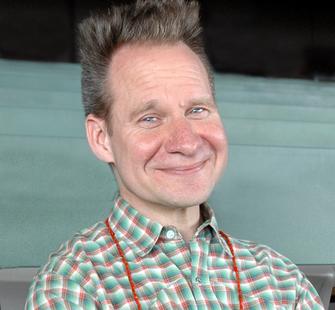 A renowned director of theater, opera,
and festivals throughout the world, Peter Sellars is known for his
reinterpretations and modern stagings of classical works. Born in
Philadelphia in 1957, Sellars attended the Phillips Academy in
Andover, Massachusetts before studying at Harvard University, where
he nurtured his creative talents for theater through innovative
performances of well-known works such as his puppet version of
Wagner’s Ring Cycle, his minimalist production of Chekhov’s
Three Sisters, and his swimming pool rendition of Antony
and Cleopatra. Sellars’s creative trajectory continued after
graduation when he took a position as director of the Boston
Shakespeare Company. In 1983 he received a MacArthur Foundation award
and in 1984 he became director and manager of the American National
Theater in Washington, DC.

In addition to his work directing
theater and opera companies all over the world, Sellars has been
instrumental in the production and direction of several international
festivals, including the 1990 and 1993 Los Angeles Festivals, the
2002 Adelaide Festival in Australia, the 2003 Venice Biennale
International Festival of Theater, and most recently the 2006 New
Crowned Hope Festival in Vienna, Austria.

Sellars’s has made his reputation,
however, by bringing 20th century and contemporary operas to the
stage, including works by Olivier Messaien, Paul Hindemith, György
Ligeti, Kaija Saariaho, and Osvaldo Golijov. He has also been
instrumental in the creation of new pieces that have done much to
expand the repertoire of modern opera. Working with composer John
Adams, Sellars has been the driving force behind original operas such
as Nixon in China, The Death of Klinghoffer, El
Niño, and recently, Doctor Atomic and A
Flowering Tree. Other recent projects include the production of a
Chicano version of Stravinsky’s The Story of a Soldier, For
an End to the Judgment of God/Kissing God Goodbye, staged as a
press conference on the war in Afghanistan, and a contemporary
version of Wagner’s Tristan and Isolde in collaboration with
video artist Bill Viola and conductor Esa-Pekka Salonen. In 1998
Sellars was awarded the Erasmus Prize for his work combining European
and American cultural traditions in opera and theater. He was also
elected to the American Academy of Arts and Sciences.