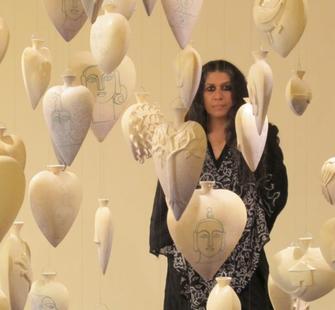 Rekha Rodwittiya was born in 1958 in Bangalore, India. She completed her
BFA (painting) from the Faculty of Fine Arts, M.S University of Baroda in
1981. A recipient of the Inlaks Scholarship, she received an M.A in painting
from the Royal College of Art, London in 1984. Rodwittiya has undertaken numerous
residency projects and site-specific works abroad and has exhibited widely both
nationally and internationally. She has been actively involved in art teaching
through alternative, non-institutionalised methods, as well as being a guest
faculty member at art colleges in the UK, France, Italy, Sweden, Australia, and
Japan. Rodwittiya lectures on contemporary Indian art in India and abroad, as
well as writing on gender-politics, issues of identity, curatorial methods, and
other subjects within an Indian/global context of art practice. Her artwork can
be found in private and public collections throughout the world.