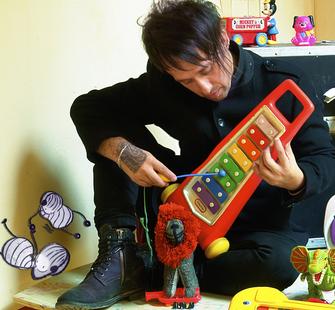 Rick Maciel is sonic researcher, a live performer, an inventor and transformer of Sonic Toys – instruments he generates through the manipulation of children’s recycled toys. He is researching ways into the sonic arts practices, with his elementary and recycled sonic toys. The development of his method has been unfolding in different ways; thus far, through workshops called “The Avatars Method” and through “Sound Installations” akin to concerts containing several performances featuring full experimentation with the toys between avatars.

At times, Maciel “operates” on a toy to transform them into musical devices, creating a new nature for those toys than they originally produced. Maciel places emphasis in a new experimental way on the practice of music, starting from the scratch without all the old rules about the formal contemporary music education.  His ensemble of sonic toys offers an emergent color sound, with a hugh consequences on the practice and experience of emotional states through sonic experimentation.

“Halo Between” is the name Maciel has given to this research between his “Sonic Art Installation” and performances that have manifested through his sonic practice, through his new method still being generated through experimentation and research.

Maciel poses an answer to the question “What is that language?” – it is the natural phrasing that every human emulates, it is “your internal child alive, the continuos real state of conscience.”

Maciel’s work has brought him to cities around the world for recording, composing and playing, including performances and recordings in México, Argentina, Colombia, Germany, France, United Kindom, Spain, United States, Iceland, Jápan and more.  Several times, Maciel has appeared in music festivals in Iceland such as the “Iceland Air Waves Fest” in Reykjavik, Keflavik – which Maciel believes is perhaps the most representative festival for a lot of reasons, but predominantly because of the connection he experienced with the Icelandic people and the unique way they create and expose their music. Maciel was extremely proud to play in an official show at the festival, as well as some of the more “off venue” events organized around the same festival; the most memorable perhaps, was the opportunity to play in Bjork`s store in Iceland in 2008.