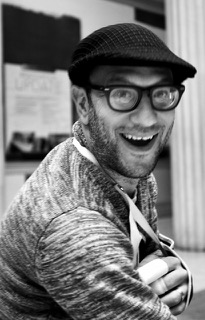 Robby Herbst is an
inter-disciplinary artist whose works explore the ways  language informs movement. He engages
contemporary and historic experiments in socio-political aesthetics in the form
of; drawing, publication, organizing, group-work, and object making. He
instigates the geographically sited critical-landscape projects of the Llano
Del Rio Collective. In 2018 they completed the guide Rebel City Los Angeles envisioning a bottom-up city, with a
five-city tour for the project. In 2016 he completed the public project New New
Games, a series of tournaments and events in California’s Bay Area supported by
Southern Exposure and the Headlands Center for the Arts. A concurrent
exhibition of related drawings was held at Commonwealth & Council in
LA. In 2015 he co-organized Chats About Change; encounters addressing
social change and social practice in Los Angeles supported by LACE and CalState
Los Angeles. He’s a co-founder of the Journal of Aesthetics & Protest. He’s
been awarded grants from the Mike Kelly Foundation, a Warhol Arts Writer’s
Grant, the Graue Award, a research grant of The Danish Arts Council, and a
Durfee Grant. From 2012 to 2016 he was a columnist for KCET TV’s Artbound.