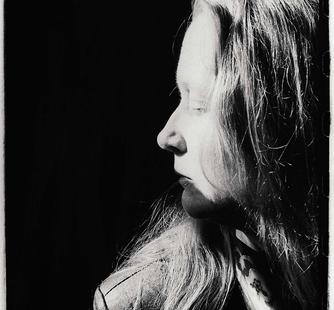 Pianist, composer, singer and songwriter Robin Holcomb has performed internationally as a solo artist and leader of various ensembles. A former sharecropper in North Carolina, she has composed extensively for orchestra, chamber ensembles, big bands, dance, theater, and film.
Her most recent recording is “The Point of It All,” a collaboration with Talking Pictures and Wayne Horvitz. The orchestral suite “Up On Hitt’s Hill” portraying the history of the Hitt Fireworks Factory in Seattle, WA premiered in June 2011. Current projects include scoring of previously silent films by Ozu and Naruse for Criterion; commissions for big band; the creation of an oratorio reflecting the Everett Massacre of 1916 with Wayne Horvitz to premiere in 2012 at ACT Theatre in Seattle; and the collaborative construction of “We Are All Failing Them,” a song cycle with film, live sfx, and shadow manipulation regarding the Donner Party saga premiering at the Northwest Film Forum in 2012. Holcomb’s music, recorded on Nonesuch, Tzadik, Songlines, and other labels has been called “staggeringly beautiful” (New York Times).