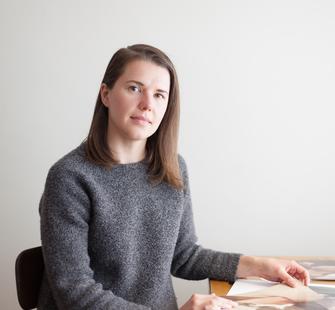 Serrah Russell
was born in 1986 and makes her work and her home in Seattle, Washington. Russell earned
a Bachelor of Fine Arts in Photography from the University of Washington and
then began exhibiting and curating in the Pacific Northwest. Russell’s work has
been exhibited in solo and group exhibitions in the Pacific Northwest and in
Vancouver, British Columbia; Melbourne, Australia; London, England; Athens,
Greece; Los Angeles, California and New York, New York. Her work stems from the malleability
of the photographic image–particularly how, with slight alterations, the same
photo can evoke vastly different memories and emotions. Russell uses simple
crops, folds, layers and mergings to transform her source material of magazine
advertisements into vessels for political and emotional views and personal
narratives. Through her work, Russell seeks to better understand the
relationship between the individual and their surroundings, where they separate and
where they become one.

Russell also works as an independent curator. She founded Violet Strays, an online exhibition platform (2011-2016), and has curated exhibitions with NEPO, SOIL, and is currently a curator and director with
Vignettes.