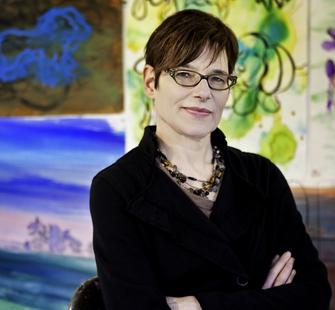 Shelley Jordon was born in Brooklyn, New York.  She received her BFA from the School
of Visual Arts in New York and her MFA from Brooklyn College. She currently resides and works in
Portland, Oregon.

Jordon is a painter and moving image artist who
explores the intersection between interior and exterior worlds and connections
between past and present experiences. She challenges the boundaries of
traditional painting and drawing media through experimentation with installation,
animation and performance that investigate states of mind and states of
relationships.

She has been a recipient of  the Visual Arts Fellowship for the American
Academy in Jerusalem, two Oregon Arts Commission Individual Fellowship Awards,
two Ford Family Career Opportunity Awards, a Fulbright-Hayes Group Travel
Research Grant to Yemen and Tunisia and an OSU Center for the Humanities
Fellowship Award.

Her artwork has been exhibited in numerous venues
nationally and internationally, including the Frye Museum in Seattle, Washington;
the Wexner Center For the Arts in Columbus, Ohio; the Oregon Jewish Museum,
Oregon; the Portland Art Museum, Oregon; the Museo Cultural, Santa Fe New Mexico;
the Tacoma Art Museum, Tacoma, Washington; the Contemporary Art Center of
Thessaloniki, Greece; Mabaada (the Lab), Jerusalem, Israel; and the Portland
Museum of Art, Portland, Maine.

Jordon, a Professor of Art at Oregon State
University, has participated in artist residencies at the Wexner Center for the
Arts, and the American Academy in Rome. She recently participated in “the
A-Team; Artists For Social Change”, at NOASS, a floating art center, in
Riga, Latvia, where she exhibited and spoke about her work.