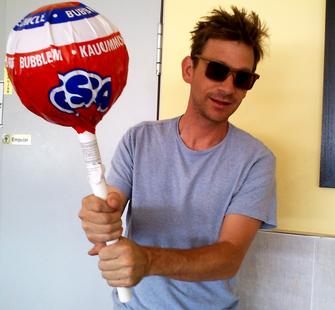 Sonny Smith began playing Jimmy Yancey covers on piano in little mountain town clubs of Colorado when he was 18. These piano gigs led him to Denver and then into Central America where he busked up and down the Telemanca Coast with a couple friends in a band. At this time he was working on screenplays that ultimately broke apart into long-winded songs with characters, dialogues and plots. In 2005, Watchword Literary Magazine commissioned Sonny to produce One Act Plays, a series of songs written in theater play format, but sung. With guest musicians ranging from Neko Case, Miranda July, Jolie Holland to John Dwyer of the Oh Sees. Following this was the release of Fruitvale, on a tiny imprint. A loose song cycle about a neighborhood in Oakland where he lived. In 2000, he wrote and directed his first short movie Kid Gus Man. In 2009 he released Tomorrow is Alright (soft abuse/secret seven) with his band Sonny & The Sunsets, a loose collective of bay area musicians. After multiple tours and various collaborative/solo releases, Sonny and the Sunsets released their 2nd full-length, Hit After Hit, via Fat Possum on April 12, 2011. This was followed by 3 more albums, the last from 2014 entitled Talent Night at the Ashram , is a series of songs based on short films Smith wrote but has not completed.