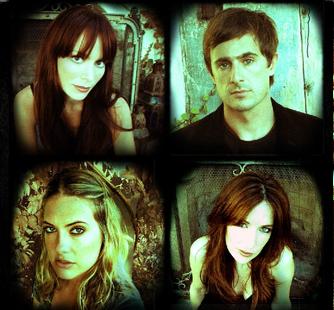 Formed in 2003, Los Angeles-based SONUS QUARTET is forging a
path to a new definition of the classical string quartet. Their
unconventional approach weaves effortlessly between musical styles
like classical, pop, rock, funk, folk, and hip-hop, as well as fusing
these styles together in concert and in original arrangements.

On the classical front, Sonus has performed in prestigious concert
halls, from appearances with Los Angeles Philharmonic
Concertmaster Martin Chalifour in Walt Disney Concert Hall, to a
New York debut in Lincoln Center’s Paul Hall. They trained with the
world-renowned Juilliard Quartet, performed alongside the
Alexander Quartet, and completed a chamber music residency at
the Banff Centre in Canada. Their recording of Bernard Herrman’s
‘Echos’ quartet is broadcast regularly on KCSN FM radio.

One of the things that sets Sonus apart from other string quartets is
the active role they play in writing and arranging their own music.
Sonus wrote original arrangements for their versions of
‘Zigeunerweisen’ and ‘Within You, Without You’ as well as many
other classical and non-classical pieces they have performed live
and recorded. They also often write for the artists they record with,
most recently having arrangements featured on Van Hunt’s ‘On The
Jungle Floor’ and Martina Topley-Bird’s ‘The Blue God.’

As well as playing in the quartet, the members of Sonus each have
active individual recording and performance careers, both in L.A.
and abroad. Individually they have performed alongside such
legends as Henri Mancini, Prince, Paul McCartney, and Stevie
Wonder. They are all members of the L.A. based hip-hop orchestra
daKAH, and with them have had the opportunity to perform at the
New Orleans Jazz Festival, South by Southwest, and The Playboy
Jazz Festival.

Sonus performs often in L.A., with shows including a variety of
repertoire from Shostakovich to The Cure. They also regularly back
other artists, like Justin Clayton and Annie Stela, in live shows, and
recently finished touring with Gnarls Barkley. They are currently in
pre-production on their debut album…