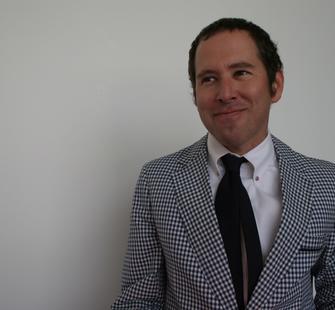 Tao Urban was
born in Walnut Creek, California in 1970.
He received his BFA in painting from the Rhode Island School of Design,
Providence, Rhode Island, in 1993 and his MFA from the Cranbrook Academy of Art, Bloomfield Hills, Michigan in 2000.

Urban investigates the space between art and design by creating objects
and installations that directly engage the viewer and how they imbue products
with meaning, both cultural and personal, concrete and abstract.

Urban has had solo exhibitions at the Swarm Gallery, Oakland, California
in 2007; the Big Biscuit Gallery, Detroit, Michigan in 1998; and the
Acuna-Hansen Gallery in Los Angeles, California in 2002, 2003 and 2006. His
work has been featured in group shows at the Midway Contemporary, Minneapolis,
Minnesota; Austin Design Center, Austin, Texas; New Langton Arts, San
Francisco, California; High Desert Test Sites 2, Joshua Tree, California; and
the Torrance Museum of Art, Torrance, California.

Urban has lectured and been a visiting artist at a number of institutions
including Carnegie Mellon University, Southern California Institute of
Architecture and the Cranbrook Academy of Art. He currently teaches furniture
design at California State University at Long Beach and lives in Los Angeles.