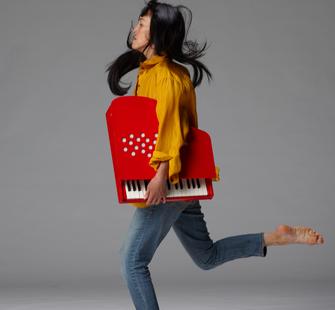 Tiffany Lin was born in Taiwan and raised in the central valley of
California. She currently resides and works
in Seattle, Washington.

Lin began studying classical piano at a young age. She continued her
piano studies at Valencia’s California Institute of the Arts where she majored
in Piano Performance, and subsequently earned her bachelor’s in music at the Cornish
College of the Arts in Seattle, Washington in 2005.

She explores the potential of sound, pursuing music that utilizes the
piano as a multifaceted instrument in provocative, engaging performances.
Commissioning and performing works for toy and nontraditional pianos, she
sidesteps the instrument’s perceived limitations, enmeshing traditional
keyboard repertoire with boundary-defying new music.  Her small-town, classical background is what
has influenced her interest in expanding standard piano techniques and
disassembling pianos.

Lin’s awards include a fellowship from the Virginia Center for the
Creative Arts, a City of Seattle Office of Arts and Cultural Affairs CityArtist
Grant, a Jackstraw Artist Support Residency, a 4Culture Individual Artist
Project Grant, and an Artist Trust GAP grant.

She has performed the complete John Cage Sonatas and Interludes for
prepared piano on KEXP 90.3 FM. She has performed in venues including The Moore
Theater and On the Boards (Seattle, WA), the Roy O. Disney Performance
Hall (Valencia, CA), the Seattle Art Museum, and at the International Festival
of Contemporary Performance (NYC).