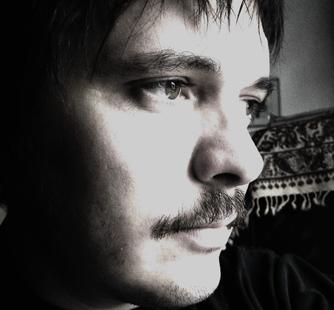 Trevor Dunn was born in 1968 behind
the Redwood Curtain traversing a fine line between hippies and
rednecks. His first instrument was the clarinet and he began to
focus on the electric bass at age 13. Four years later he co-founded
the avant-rock band Mr. Bungle. In 1990 he received a BA in music
from Humboldt State where he performed Koussevitsky’s Concerto for
Double Bass with the HSO. In 2001 he was commissioned by the Elaine
Kaufman Cultural Center to write a solo bass piece for Jon Deak. Mr.
Deak performed “Depaysemant” for prepared contrabass later
that year at Merkin Hall, Lincoln Center. Currently Dunn lives in
Brooklyn, NY and can be heard on over 65 recordings. In 2008 he
released a collection of film music on the Tzadik label, and in 2009
he plans on unleashing a brand new rock band called MadLove. Other
recent bands include Fantomas, John Zorn’s Electric Masada,
Moonchild, Curtis Hasslebring’s New Mellow Edwards and occasional
appearances with David Krakauer, Marc Ribot, Raz Mesinai, Rob Price,
and/or Andrew D’Angelo.