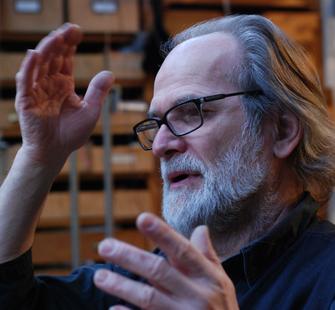 Trimpin is a Seattle-based kinetic sculptor, sound artist, musician, composer, and inventor. He has pioneered the development of computer-driven instruments, including many built prior to the advent of the MIDI interface, but his work almost always includes acoustically produced sounds and he has created devices to play every instrument of the orchestra. Most of his pieces integrate both sculpture and music in some way.

Since the 1970s, Trimpin has created sound sculptures, installations, and performances and held residencies worldwide, at venues such the Minnesota Science Museum, Experience Music Project, BAM, Banff Arts Center, Exploratorium, Yerba Buena Center for the Arts, Paris Opera, Palacio Bellas Artes, Lincoln Center, Claude Monet Garden, Cal Arts, and many universities and festivals. Trimpin is the recipient of many grants and awards including a MacArthur “Genius Award” in 1997, Guggenheim Fellowship, and others from Creative Capital, the Goethe Institute, Meet the Composer, Apple Computer, National Endowment for the Arts, and Lila Wallace-Readers Digest Fund.

A feature documentary, TRIMPIN: The Sound of Invention, directed by Peter Esmonde, premiered in March 2009 and has since screened at film festivals throughout the US.