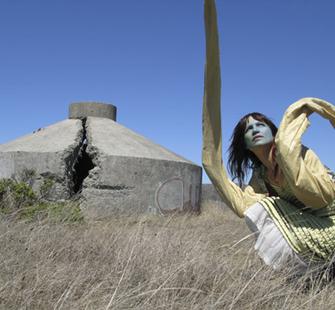 Given that English is Violet Juno’s fifth language, it is perhaps no surprise that Violet’s performance work encompasses several artistic languages including spoken word, movement, kinetic and wearable sculpture, theatrical tableaux, soundscapes, and a three-dimensional form of mapping. Juno seeks to create a multi-sensory experience so that the artwork is not just what is happening on stage but also what audience members conjure in their minds of the various strands to take with them when they leave the theatre. Since 1990, Juno has performed and exhibited her multi-media performance work at over 70 theaters and art spaces in 30 cities in the United States, Canada and Scotland. Over the years, Juno has performed in contemporary art spaces such as MOMA and PS122 in New York, Diverse Works in Houston, and LACE in Los Angeles. In addition, Juno creates site-specific performance in unusual environments such as a farm hayloft in upstate New York, a theater in Glasgow, Scotland carved out of an underground train yard, a dry creek bed in St. Louis, MO, and the military batteries of the Marin Headlands.