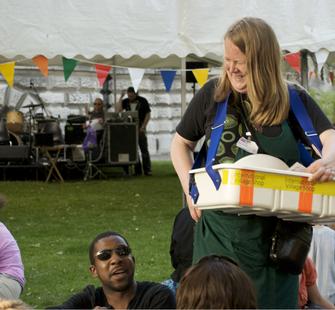 Wapke Feenstra is a writer and artist who derives her sources by tapping into local knowledge. Her most recent projects include Former Farmland (at Ars Electronica, Linz 2008 and Oldenburg 2009), which explores how memories on a two-dimensional photographic screen can redefine and question the sites that people encounter. Her Moving Landscape project, which ran from 2009 till 2011 in Genk (Belgium) and the surroundings, was a visual roam of land-use and primary industries. Feenstra tends to intervene in existing visual experiential ecology and existing landscape (usually rural, but not always) in order to coax out new or current readings.

In 2003 Wapke Feenstra (Rotterdam, NL), Antje Schiffers (Berlin, GER) and Kathrin Böhm (London, UK) founded myvillages.org, an artists initiative with an interest in the rural environment as place for and of cultural production. Under the umbrella of myvillages.org, they run long-term and collaborative projects such as the Bibliobox and the International Village Shop. In different constellations they organize multidisciplinary rural conventions, sell goods in one-hour-village-shops; publish books; screen films; and mount exhibitions. And lately, they filled a year-long larder with food, drinks and knowledge to host guests in Haus der Kulturen der Welt in Berlin (2011).

myvillages.org plans to use their residency in Montalvo to deepen their vision of rural America and bring it home. And visa-versa