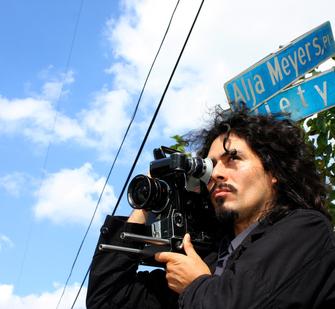 Cordova is an
interdisciplinary cultural practitioner whose work addresses the metaphysics of
space and time. He has been in residence at The Studio Museum in Harlem; The
Museum of Fine Arts Houston; MacDowell Artist Colony; and Skowhegan School of
Painting and Sculpture, among others. His work is in the public collection at
the Whitney Museum of American Art, New York; Guggenheim Museum, New York;
Harvard University, Cambridge; the Yale Art Gallery, New Haven; Museo de
Arte de Lima, Peru; Ellipse Foundation, Cascais, Portugal; and La Casa de las
Americas, Havana, Cuba; among others. Cordova was represented in the Museum of
Modern Art/PS1 Greater New York exhibition focusing on contemporary artists who
have had a significant influence in society. In 2011, he was invited for his
first one-person museum exhibition in Europe, yawar mallku:
royalty, abductions y exiles at La Conservera, Murcia, Spain
and also awarded a Joan Mitchell Foundation Grant. In 2013, he was nominated
and participated in the prestigious American Academy in Berlin
Fellowship. Read more at sikkemajenkinsco.com.