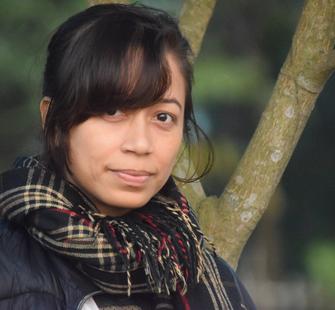 Yasmin Jahan Nupur is a visual and performance artist whose work is influenced by the ecological and community driven aspects of life. Depicting human relationships from various points of view, her work explores class distinctions and the social discrepancies people face, particularly women and migrants of South Asia, in an effort to increase understanding between people of different backgrounds. Her recent work has engaged deeply with architecture and textile, with a particular focus on Jamdani (a form of hand-woven textile), creating soft sculpture exploring the physical and social constructs affecting her psyche. She is a member of Britto Arts Trust in Bangladesh, and in 2015 was invited to attend a performance residency at the Delfina Foundation in London. Her work has been featured in exhibitions internationally, including: Cosmopolis #1.5: Enlarged Intelligence, Mao Jihong Arts Foundation in collaboration with the Centre Pompidou (2018-1019); Beyond Borders, Whitworth Art Gallery, Manchester (2017-2018); the Serendipity Arts Festival, Goa (2016); the Dhaka Art Summit (2012, 2014, 2016, 2018); the Bangladesh Pavilion, 54th Venice Biennale (2013); and the Asian Art Biennale, Dhaka (2013, 2008), where she received the Honourable Mention Award for her inclusion in both editions. Her recent body of work has been shown at Exhibit320 gallery in Delhi in 2018 in an exhibition titled “Patterns of a Tactile Score.”

Yasmin Jahan Nupur’s residency at the Lucas Artists Program is supported by a partnership with ArtForumSF.