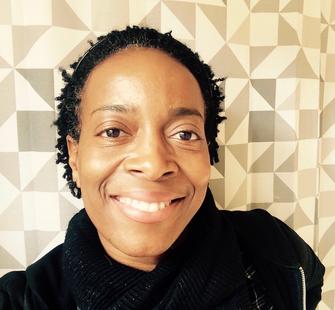 Yona Harvey writes poetry,
nonfiction, and hybrid works that underscore issues of anxiety, micro
aggressions toward Black women, rebellion, and self-care. Her nonfiction
chronicles her late sister’s struggles with depression and how conflicting
accounts of her sister’s death at a Cincinnati, Ohio ER when seeking
psychiatric care have impacted her family.

She recently contributed to
Marvel’s World of Wakanda,
a companion series to Ta-Nehisi Coates’s bestselling comic, Black Panther.  She is currently co-writing with Coates
another comic book, Black Panther and The
Crew. She is the first Black woman to write for Marvel’s iconic character
Storm.

Her poetry collection, Hemming the Water, was awarded the 2014
Kate Tufts Discovery Award from Claremont Graduate University.  Her writing appears in many publications
including The Force of What’s Possible:
Accessibility and the Avant-Garde and Writing Away the Stigma: Ten Courageous Writers Tell True Stories About
Depression, Bipolar Disorder, ADHD, OCD, PTSD & more.