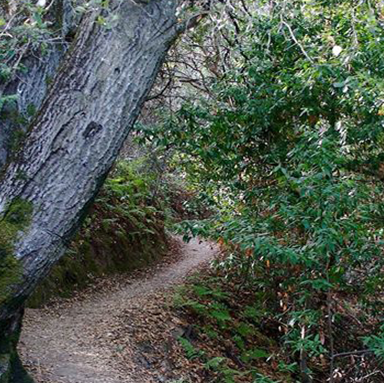 Four Bridges is a site-specific sound work by award-winning composer Howard Hersh designed to be heard by listeners over mobile devices as they walk through Montalvo’s woodland environment. The work coordinates space, sound, and motion into a unique immersive ambulatory experience: as listeners follow a meandering woodland path on Montalvo’s grounds, they are taken on a sonic odyssey that leads them through redwood canyons into oak-lined meadows. Four Bridges’ narrative is inspired by our primal memories of the forest and the mythology that depicts it as an enchanted, mysterious place. It also explores the woods as a metaphor for our common journey and what it means to carry the burden and promises of a shared humanity.

Combining instrumental music, the voices and tinkling laughter of a children’s choir, field recordings, audio clips from archival sources, and readings of poetry and prose, Four Bridges intersperses light, airy and playful interludes with sober passages and subject matter. Some of the most compelling audio material includes the voices of victims of political and religious injustice calling out from the twisted underbrush, first with poems inscribed by Chinese immigrants on the walls of the Angel Island Detention Center, then in the person of a Japanese-American whose father was interned during the Second World War, and finally in the reminiscences of a Holocaust survivor.
​
Describing his new work, Hersh states, “Four Bridges celebrates the beauty, mystery, and magic of the forest. Through its music and texts, I hope to create a sonic portrait of the powerful ties that bind humanity to the forest, and the mythology through which these bonds are expressed. The woods enrich and nurture us with their enduring presence; they are also the eternal observers that absorb and reflect the tragedies of our own dark tales. This immersive sonic journey does not dwell on darkness, however. Instead, it is infused with the innocent laughter of child fairies and a lightness that promises redemption and joy.”

HOWARD HERSH
Website
Howard Hersh is a US-based composer who has received many awards for his work from such organizations as Meet the Composer, the American Symphony Orchestra League, the American Composers Forum, ASCAP, the Puffin Foundation, the Rex Foundation, and the Irvine Foundation. Howard’s works have been performed at venues that range from the Tanglewood Festival to Grace Cathedral in San Francisco, from European concert halls to the California Vietnam Veterans Memorial. Together with his composition work, Howard has founded and directed many new music groups, including the San Francisco Conservatory New Music Ensemble, and served as Music Director of KPFA-FM. His latest CD of solo and ensemble works Dancing in the Pink House was released this year. Learn more about Howard Hersh at howardhersh.net.

Four Bridges was commissioned by the Lucas Artists Program at Montalvo Arts Center, 2018 and made possible through the generous support of the following program partners, exhibition sponsors, and Friends of the Lucas Artists Program:
​Special thanks to Santa Clara County Parks and California Conservation Corps.
Anonymous • Ariko Family Foundation • John and Maureen Chowning • Jennifer and Phil DiNapoli • Sally and Don Lucas • National Endowment for the Arts