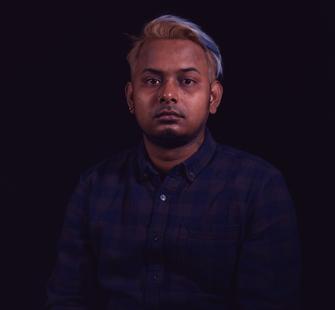 Born in Bangladesh, Ali Asgar (Tara) is a transdisciplinary artist and cultural producer whose work focuses primarily on the body and the relationship between body and space. Asgar’s early work and activism were around the areas of gender, sexuality, and social norms, which often reflects upon their personal struggle and experience of growing up in conservative Bangladeshi patriarchal society and its attitude toward members of the LGBTQI community. The controversial and politically charged nature of Asgar’s work—exploring gender and eroticism—exposed them to significant risk in their home city of Dhaka, where Asgar staged provocative street performances and gallery exhibitions intentionally designed to challenge the conservative sexual mores of the culture. Isolation and displacement play a key role in Asgar’s current works and thought process. As an artist whose provocative art and personal identity placed them at extreme risk, Asgar was awarded a prestigious fellowship from the Artist Protection Fund in 2016. Asgar is currently working on an MFA in Performance at the School of the Art Institute of Chicago.