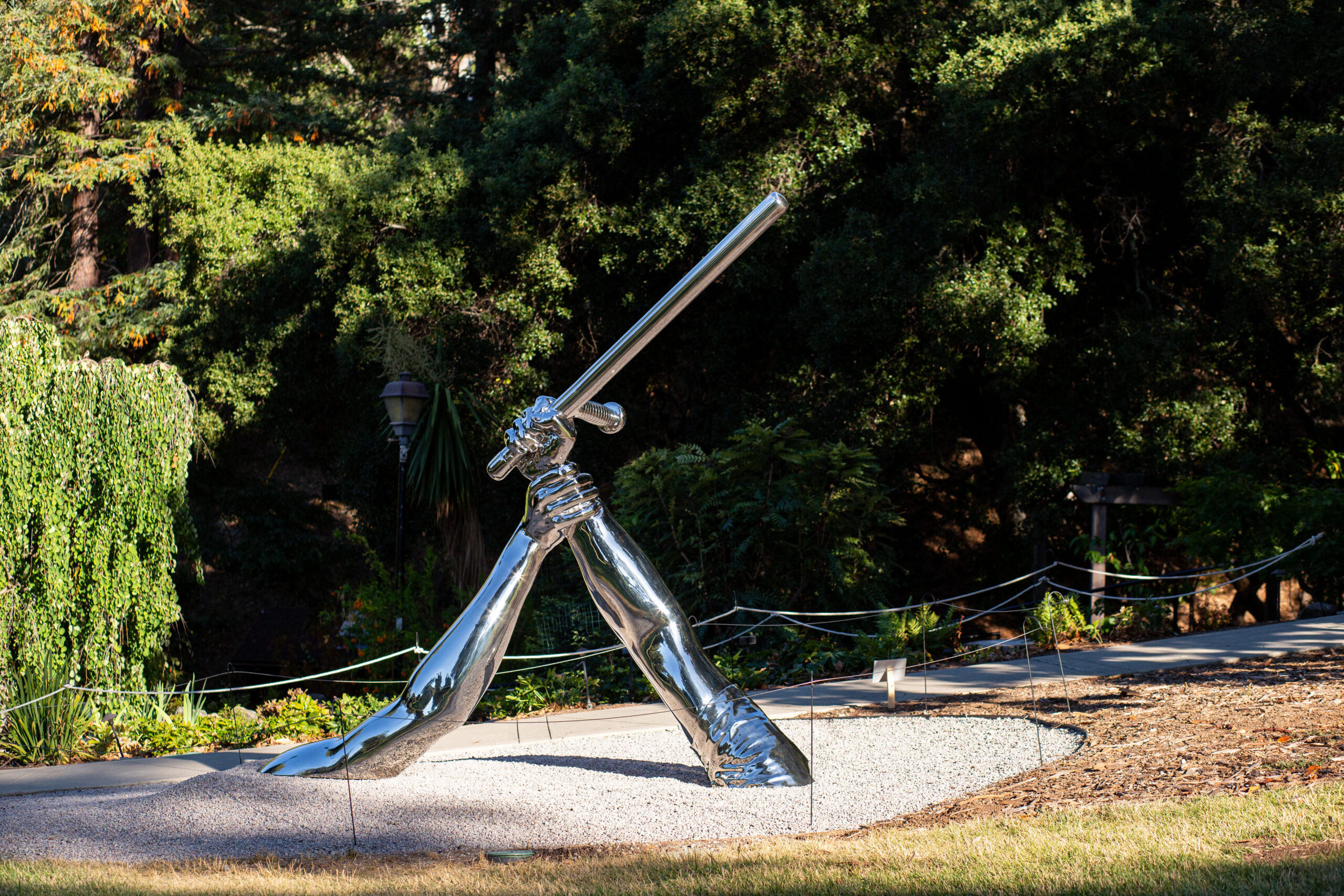 Refiguring the Body in Landscape

Claiming Space: Refiguring the Body in Landscape is an outdoor group sculpture exhibition held throughout the grounds of the Montalvo estate. The exhibition presents a series of works by local and national artists that reimagine how the body is represented in landscape and upend the exclusionary figurative traditions that dominate historic American gardens and other civic and public spaces.

A historic property, Montalvo was originally home to politician and patron of the arts James Duval Phelan. Phelan was the first popularly elected Senator of California, active in the movement to restrict Japanese and Chinese immigration to the United States. His failed reelection campaign featured the racist slogan, “Keep California White.” Montalvo’s 175-acre park contains a number of neo-classical figurative allegorical sculptures and portrait busts. These works were part of Phelan’s original art collection.

Historically, figurative western sculpture has emphasized idealized representations of the human body in white marble statuary drawing on the classical tradition. This tradition has perpetuated narratives of whiteness claiming and occupying public space to the exclusion of other identities and body types. The works on view in this exhibition unsettle and destabilize this prevailing narrative, opening up critical dialogue and conversation and claiming space for wider representation and inclusion.

Some artists in the exhibition use figuration or the body as a tool to create work that protests injustice. With Strike, Hank Willis Thomas depicts two disembodied arms in polished steel raised up. One arm wielding a nightstick is grasped at the wrist by another hand, suggesting an encounter between a protester and a policeman. Cassils’ The Resilience of the 20% is an imposing bronze sculpture memorializing the resilience of queer communities and referencing the 20% increase in murders of trans people in 2012. The work was cast from the bashed clay remnant of the artist’s Becoming An Image performance where Cassils unleashed an attack on a 2,000 pound clay block in total darkness.

Other artists interrogate and critique the exclusionary traditions of western art history’s depiction of the body. Continuing her work exploring the skin tone palette as a meditation on colorism and the evils of racism, Pilar Agüero-Esparza presents Of Color. This 8-foot-tall, 20-foot-long serpentine sculpture constructed from graduating colored bands of intricately woven leather is an homage to the artist’s Mexican craftsman heritage, while also pushing against cultural traditions that value light skin tones and devalue dark tones. Oliver Jackson’s sculptures are informed by a deep understanding of global art history and the inequities and erasures embedded in the classical tradition. His work Marble Sculpture No. 1, brings together aesthetic traditions from Europe and Africa to reveal three figures-a couple with an infant-both emerging from and restrained by the marble form. The suggestion of bodies leaves the viewer to fill in the blanks with their imagination rather than imposing a specific identity or  interpretation of who is depicted in the work.

Many artists in Claiming Space use figuration to celebrate bodies not typically represented in our public spaces and examine questions about who is represented and who is excluded. Exploring issues of personal identity, Wanxin Zhang presents Color Face, a large-scale ceramic bust treated with colorful drip-like glazes that obscure a visage loosely modeled after the artist’s face. The work captures the cultural duality that Zhang experiences as a Chinese American artist living in San Francisco. Alison Saar’s Winter is a work from a series of four that Saar conceived around each season. The series explore the cycles of nature, women, and creativity. As with many of her other works, Winter imbues the black female body with power. She depicts a curled up female figure who may appear vulnerable, but retains a forceful dormant agency.

Claiming Space is part of Montalvo Arts Center’s broader institutional mission to take an honest and direct look at the ways in which it has perpetuated exclusionary practices in the past, as it works toward fostering a more inclusive, welcoming space for all.

Download and print our Family Guide & Activity Book — a great way for visitors of all ages to engage with this exhibition!

Works In This Exhibition

This exhibition is made possible through the support of our lead sponsor, the Marcus Family Foundation.