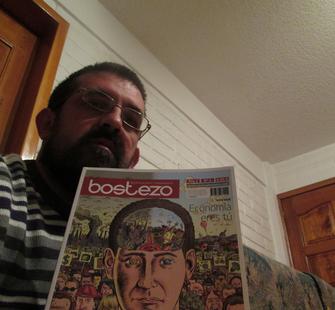 Francisco (Paco) Inclán (Valencia, Spain, 1975) is Managing Editor of Bostezo since 2008. He is a journalist, writer and activist specialized in the relationships between Arts and Politics. He has published extensively about these topics in prominent Spanish and Mexican periodical publications. He has travelled across Colombia, Ecuador, Guatemala, Honduras and Mexico, where he launched different media initiatives collaborating with NGO’s and grassroots movements. A collection of his works about art, literature and culture in Latin America has been recently published as “La Vida Póstuma”, by Fides Ediciones (México). Also in recent times he has concluded an artist residency devoted to study and collect rural artistic practices (“Towards a Rural Psychogeography”) in Galicia, Spain.