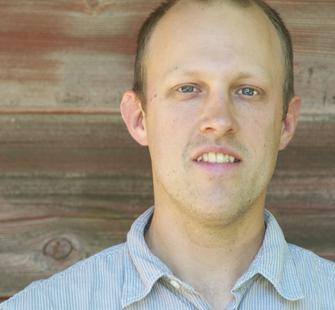 Justin Lowman (originally, from Janesville, WI) investigates light, surface, and color through various means and materials, fluorescent lights, video projections and filtering scrims/gels in response to specific conditions of built environments. While potentially remote and abstract at one level, much of the meaning is proposed concretely within the actual moments of the viewing situation. He received his MFA in Art from Art Center College of Design in 2009 and two BAs—Art History and Classical Humanities–from the University of Wisconsin in 1996.

Currently, Justin’s primary focus is an ongoing site project, titled “Barn Rays.” Falling in ruin, it’s a two-stall, pole barn built by his grand in-laws in 1952; it is situated in a “sub-rural,” mid-century context of the San Fernando Valley where he resides with his wife and two boys, ages seven and nine. Justin has also participated in numerous group shows, including Steve Turner Contemporary; Armory Center for the Arts; Cottage Home; and Scream, London. Justin works part time as a Teaching Artist through the Armory Center for the Arts in Pasadena, CA and part time as Preparator at the Hammer Museum. He also volunteers as a parent board member; art teacher; and garden hand for Our Community School in Chatsworth, CA.