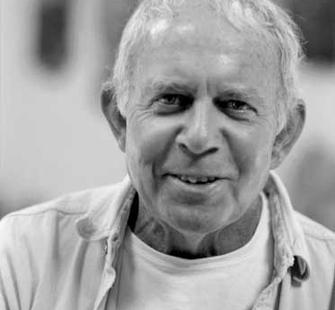 Stephen De Staebler was born on March 24, 1933 in a suburb of St. Louis, Missouri. He earned his BA in theology from Princeton University in 1954 and his MA seven years later at the University of California, Berkeley, where he studied under Peter Voulkos. He taught at the San Francisco Art Institute during the mid-1960s and held a long tenure at San Francisco State University, from which he retired in 1995.

Over the course of his career, De Staebler was the recipient of numerous awards, including two National Endowment for the Arts Fellowships and a 1983 Guggenheim Foundation Fellowship. His work can be found in the permanent collections of the Metropolitan Museum of Art, The Fine Arts Museums of San Francisco, Oakland Museum of California, San Francisco Museum of Modern Art, San Jose Museum of Art, Crocker Art Museum and the Smithsonian American Art Museum, among others.

In the late 1990s, De Staebler suffered from a number of significant health problems, including cancer and a form of Parkinson’s disease. Despite these physical challenges, he was very productive in the later portion of his life. He passed away on May 13, 2011 in Berkeley, California. A retrospective exhibition of his works curated by Tim Burgard, chief curator of American art, took place at the de Young Museum in San Francisco, California in 2012. It was accompanied by a monograph which includes essays by Timothy Anglin Burgard, Rick Newby, and Dore Ashton.