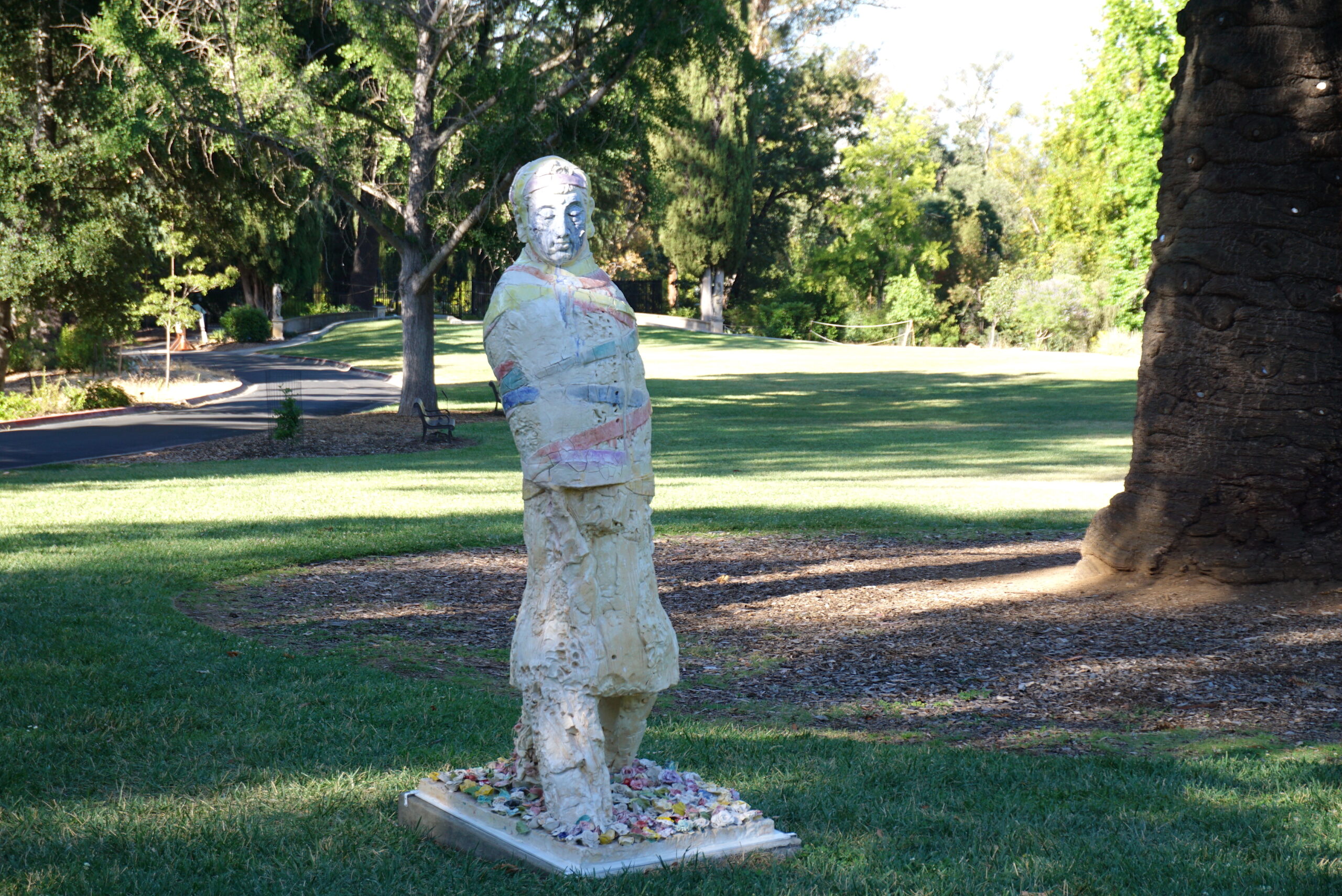 Return to the Garden of Eden

Return to the Garden of Eden is deeply inspired by Zhang’s upbringing in Maoist China, his subsequent disillusionment, and his ultimate relocation to California as a young artist in the 1990s. The sculpture reflects both a geographical journey and an ideological search. The monumental clay figure features the artist’s signature style – a blend that reflects Bay Area Figurative and California Funk traditions with nods to Chinese history. Inspired by his time studying with Peter Voulkous, and by the innovations of Robert Arneson and Stephen De Staebler, Zhang’s figures explore the organic, evocative qualities of clay, and the impact of popular culture on the body. The work is a romantic image of a journey home, to a place where there is hope and community. In this place, there is room for diverse religious beliefs and a spiritual life of one’s choosing. The figure with a Buddha-like face emerging from a base of porcelain flowers is Zhang’s version of paradise, combining Eastern and Western influences into a single portrait that embodies calm and joy.

“I grew up with the religion of Mao. In my world at that time, Mao made himself a God-like figure that deserved daily worship. The twist was that Mao liked to tell us that all religion is poison. As he was destroying many Buddhist temples and churches in China, he also made a point to tell us that we were living in a paradise on earth. It was a contradiction intended to keep people in line. When I brought myself out of his world and to the US, I finally understood that all religious beliefs are extensions of human civilizations’ aspirations and desire to answer fundamental questions such as: Where do we come from? Who are we? Where are we going? Religions attempt to provide answers about the origin and meaning of life. They can provide hope and community.

“Return to the Garden of Eden is a romantic image of a journey home, to a new home, and away from the corrupt meaning of paradise as seen through the lens of Mao. Combining a Buddha-like face on a figure who emerges from a base of flowers, I am sculpting my version of a paradise, one that combines Eastern and Western ideals. With its colorful face and rainbow band, the figure’s calm joy expresses the human need to seek freedom from physical and spiritual limitations—to pursue hope.

“The sculpture was built up with slabs of stoneware and high fire glazes and was fired in multiple pieces and then assembled. The porcelain flowers were individually made by hand, as no one is the same as another.” —Wanxin Zhang